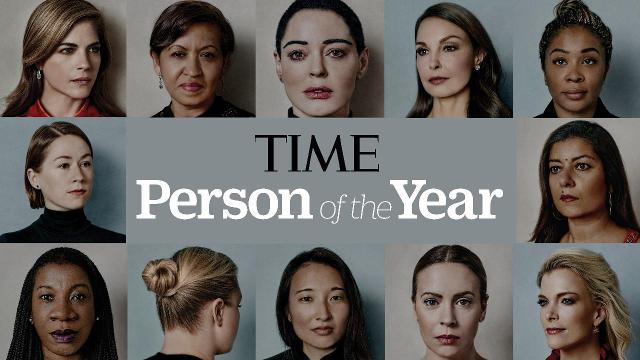 This has been a hell of a year for sexual violence.

That men (and the occasional woman) are finally being held accountable for their gross actions is a HUGE step in the right direction, but as always, we have so far yet to go.

Calling out those in power that have abused others gained so much momentum thanks to a resurgence of the #MeToo movement. Originally started by social activist Tarana Burke in 2006, it exploded on Twitter this year with thousands of women (and plenty of men) sharing their stories of being sexually harassed, assaulted, and abused. Every woman you talk to has a story, whether it’s being catcalled, having unsolicited dick pics sent to their phone, having their ass grabbed, or being violently raped, be it by a total stranger or someone they thought could be trusted.

We all have story.

The New Yorker exposé on Harvey Weinstein is a difficult, often nauseating read, but because of that story, it’s no longer a so-called “open secret” that he’s regularly committed sexual assault against numerous women. There had been allegations against other powerful men earlier in the year, but the Weinstein story set off a domino effect, with more and more women—powerful women, no less—coming forward. It showed the world that sexual harassment happens to all women, no matter how rich and famous.

Having the “Silence Breakers” as TIME’s Person of the Year was a monumental step for women finding the courage to speak out about sexual assault and harassment. This was the year that people finally started listening, or at the very least acknowledging, that women experience sexual violence and harassment on a regular basis. It’s everywhere right now—you can’t turn around without hearing about another politician or celebrity that did some very bad shit to multiple women and men.

This is a good thing. Breaking the silence about serial abusers will save others from becoming victims and hopefully help those that have been victims start to heal. Who would have thought at the start of this long, ridiculous year that we’d actually be having these discussions? Especially after the most powerful country on earth voted a known sexual assaulter into the Oval Office.

Then you get people like Matt Damon saying stupid shit like this and it makes you wonder if we’ll ever move out of the dark ages.

I’m sorry (not really), but any time someone mentions this man, all I can picture is this:

Not raping someone doesn’t make you a goddamn hero, it makes you the bare minimum of a decent human being. So no, we’re not going to start praising the menfolk that have somehow managed to not stick their dick where it’s not wanted. Try listening with your ears instead of your mouth, dude.

Yes, we’re talking a lot about those men, because we need to talk about those men. Get used to it, the tide is turning and we are not taking that shit anymore. This is a conversation that’s been needed for decades, so it’s going to go on for quite a while. The Matt Damons of the world need to take a seat, and people need to stop asking their opinion.

As this mindfuck of a year winds down (remember how batshit 2016 was and we all thought 2017 would be better? Oh, we were so naive) the momentum that started needs to continue into 2018 and beyond.