According to Facebook Memories, it’s been just over a year since I picked up those crochet hooks at that Walmart in Montana and returned to Canada to root through that bin of yarn Mom had in her basement.

Oh what a year it’s been.

The whole reason I started crocheting was to stave off the likely inevitable osteoarthritis that runs in the hands of women in my family. Grandma has it pretty bad, and Mom’s got it started, so keeping the fingers limber and active seemed like a good idea.

Idle hands and all that.

We picked up a few different sized hooks and I pulled a bunch of yarn out. It turns out you can learn any damn thing by watching YouTube videos.

So I found a video for beginners and got started.

My first and second attempt. Good god these are awful.

I actually enjoy reptitive tasks; I find it meditative. It’s easier for me to think and I’ve come up with some of my most epic creative ideas while doing such repetitive tasks. Basic crochet is literally just repetition – row after row of the same motion for as long as you want.

Where has this been all my life?!

I started off easy – trying to make squares and maybe add a boarder – just trying to master the basic single crochet stitch.
I started gaining the confidence to try different stitches and patterns and my work started to get more and more esthetically pleasing. Hell, they were good enough that I started giving them away to friends.

At the same time I made hats and handwarmers and scarves, all fairly straightforward projects that were functional and could be worn and shown off.

The sheer number of hats and stuff I made over the winter, just to keep myself busy while sitting in the truck or the medic shack all day, was insane. Watch an instructional video a few times, get the pattern down pat, and go for it.

Then I got on a blanket kick and started doing infinite granny square blankets, which were a nice little project for sitting in the truck. They were square and large enough to cover one’s lap while reading on the couch or something.

And then I discovered amigurumi.

Making little animals and people and things that were small and cute was fun and fairly easy…once I got the whole magic ring down anyway.

I made cats and owls and octopi, I even found a pattern for Porgs! I love Porgs! You could crochet pretty much anything from nerd culture and it was amazing.

But I think I may have found my calling when I came across a patten for a spooky little Nightmare Before Christmas type doll. It had more pieces than anything I’d done before, but the stitches were basic so I bought the pattern and gave it a go.

This is the end result. 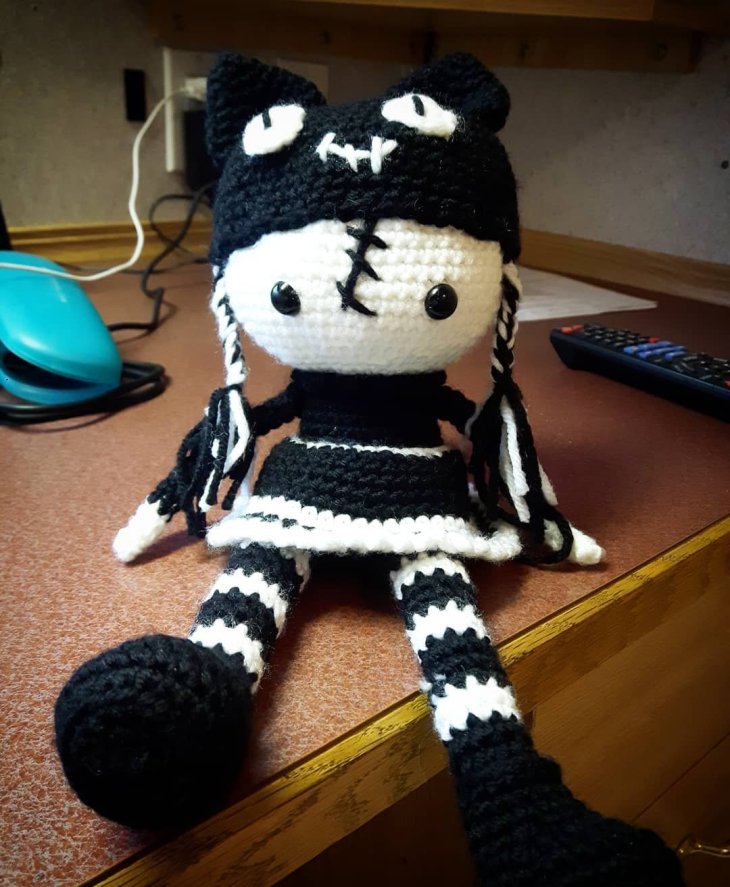 I want a kitty hat too, I should make one.

I look at this doll and I’m stunned that I actually made it. She tool three days and something like 15 hours, but it was so satisfying to finish, moreso than the other stuff I’d made.

The fact that I’ve gone from that first photo to the one above in a little over a year is pretty awesome, I think.

Looking forward to many more yarn years to come.