I don’t think I’ve ever spent so much time going “what if…” when reading a book.

This month’s read was Mort(e) by Robert Repino. I loved this book so much that I picked up the other two books in the series almost immediately after finishing.

Humanity is all but destroyed by giant ants like in some bad B-movie, and the ant Queen somehow manages to turn all animals into sentient bipedal persons capable of independant thought and emotions. Animals with paws have hands form, allowing them to do all the important things having opposable thumbs helps with – from holding sandwiches to shooting guns.

Animals with hooves don’t get hands though, bummer for the pigs, horses, cows, etc.

Now, I’m sure this question runs through the mind of everyone that’s read this book: if the Change happened for real, would my own pets kill me outright or would they let me go to fend for myself?

Oh, these furry assholes would totally murder me. 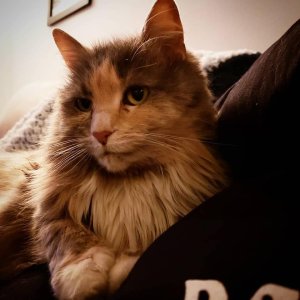 Stormy would become sentient and realize that I hold her prisoner inside the apartment and that’d be the end of me. She literally escaped off my third floor balcony and went on some (what I presume was a) grand, Disney-esque adventure for like eight hours before showing up at the backdoor of my building. She tasted freedom and still pines for it to this day. So yeah, she’ll definitely murder and eat me.

Dante might be more forgiving? I dunno, he’s an old man, he might not care. He might go hunt down my sister, since he’s never liked her. I think he’d just stay in the apartment and curse all the “damn kids” that come along and try to get him to join them.

I keep getting Animal Farm vibes from this book, mostly from the fact that a lot of the animals start behaving as their human oppressors… you’d think they would eschew human conveniences, but there’s talk about the animals eventually having cellphones again someday once the power grid is restored. They live in houses, drive cars, and some even wear clothes and drink coffee… not that I expect them to sleep on the ground and live in caves or anything. I don’t know, I just figured they’d try and do things differently?

One thing I appreciated was Mort(e) having stubby fingers on his new hands due to his human masters having him declawed when he was a pet. That drives home how extreme declawing is for cats. Not cool, humans.

The other books in the series – Culdesac and D’arc – were also very good, so I highly recommend this whole series. How often can I say that?

I’m not gonna do the Shame Nun gif this time, since more than half the club wasn’t able to make it to the meeting. Next month though…

December’s read is All Systems Red by Martha Wells, which is book one in The Murderbot Diaries… with a name like that it’s gotta be good, right?